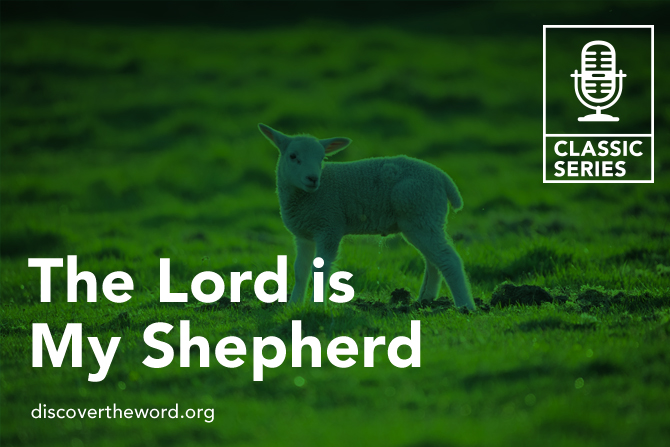 Series The Lord is My Shepherd

Psalm 23 may be one of the most familiar and best-loved passages in the entire Bible. Join Discover the Word lead teacher Haddon Robinson as he finds practical advice for life in the words of the ancient poet, David. As Haddon points you to the God the psalm writer knew, you'll discover that when the Lord is your Shepherd and you are His sheep, you'll not want for anything you really need. And when you experience dark times in the deep valleys of life, you can be sure that the Shepherd is with you and will guide you safely through to the other side.

Discover what it means to know the Lord is your shepherd

I. David probably wrote the 23rd Psalm in the last years of his life. It’s a psalm of someone who has lived much, sinned much, and been greatly forgiven.

Psalm 22 pictures the death of the Christ who delivers us from the penalty of our sin.

Psalm 23 pictures the ascended Christ who delivers us from the power of our sin.

Psalm 24 anticipates the return of the Christ who will deliver us from the presence of our sin.

III. The most significant word in the opening verse is “my.”

Let’s take a good look at sheep in order to learn something about ourselves!

I. When David writes “The Lord is my shepherd,” he implies that I am a sheep.

This is a strange way for a mighty near-Eastern king to think of himself.

Sheep are dependent, defenseless and helpless.

II. We resist thinking of ourselves as sheep.

Children would not want to be thought of as sheep.

The nations of the world do not march under the emblem of a sheep.

III. Yet for Christians who appreciate the benefit of the 23rd Psalm, we have to confess that in the great issues of life, we are like sheep—helpless, dependent, and sometimes stupid.

You won’t want to miss an invitation to rest!

I. The first verse of Psalm 23 is the key to the rest of the psalm.

The psalm is saying that if the Lord is your shepherd, then you will not lack for anything you really need.

The word that David uses for “Lord” is the Hebrew word Yahweh.

It is a sacred word to the Hebrews. They would not pronounce it in public meetings.

Yahweh was the one who not only created suns and stars and planets, but also brought the nation Israel into existence.

David is affirming that it is this mighty God who is personally involved in his life. What was true for David is true for Christians.

II. If the Lord is your shepherd, you shall not want for rest.

This is a picture of shepherd life in the Near East. Sheep often need rest, but they do not realize it.

The shepherd makes the sheep lie down in green pastures.

Sheep do not rest unless they are well fed.

Sheep do not rest if they are disturbed by some unexpected threat.

The shepherd not only leads the sheep to green pastures, but often moves among them to force them to lie down.

III. We often need rest, but we will not take it.

All of us need spiritual rest.

The writer of Hebrews tells us that one of the things God does for His own is to allow them to enter into rest.

He is not talking about the sweet bye-and-bye, but the hard now-and-now.

Discover the “still waters” in Psalm 23 for help in our exhausted, harried world

I. Sheep often need refreshment, but they draw back from water.

After a long day in the wilderness, sheep are tired and thirsty. They need refreshment.

They may come to a river that has fresh cool water.

Sheep are afraid to get water on their wool. They realize instinctively that they can become waterlogged and sink beneath the stream. As a result, they draw back from the waters.

The shepherd takes his rod and pries loose some large stones and dams up a quiet place beside the river where the sheep are able to drink.

II. What a shepherd does for his sheep, our God does for us.

At times we look ahead to some situation that we dread. It resembles a rampaging stream. We are afraid.

We often look back on those situations and discover that out of the things we feared most the shepherd has brought spiritual refreshment.

III. Sheep often wander off from the flock and cannot find their way back.

The shepherd goes out to find the sheep and carries it back to the fold.

Occasionally a shepherd will have one sheep that constantly wanders off, and he continually goes out to bring it back. But there are times when a shepherd may break the leg of a sheep and then set the leg in a rough splint.

The sheep is helpless, and the shepherd carries him for several days.

When the sheep is able to walk, it is dependent on the shepherd. It cannot handle the obstacles that other sheep handle with ease.

But when the leg of that sheep is completely healed, it has learned an important lesson. It needs to stay close to the shepherd’s side.

An eye-opening passage, as we learn that humans are a lot like sheep

I. In his experience, David knew God’s work as a shepherd in restoring him.

He committed adultery with Bathsheba and saw to it that Uriah her husband was killed in battle.

He lived in that condition for over a year. A baby was born to David and Bathsheba.

God sent Nathan to confront David about his sin.

In Psalm 51 David confesses his sin to God. But before David ever confessed his sin, God confronted David to bring him back to himself.

II. The shepherd restores his sheep when it goes astray.

III. He also leads the sheep in the right paths.

There are many “paths” in the terrain of the Near East.

Some of the paths were made by the wind.

Some were created by robbers who wanted to rob the shepherd of his flock.

There were right paths, and the shepherd knew which paths to take.

IV. What the shepherd does for the sheep, God does for us.

We often feel the need for guidance. Life can be confusing.

God’s guidance is not primarily to a place but to a position in life.

His will for you is that in everything you give thanks.

His will for you is your sanctification, being set apart for a holy purpose.

If we are what we should be, then God has no trouble placing us where He wants us to be. He has made His will for us clear in Scripture.

What valleys have you been through lately? Have you seen the Shepherd at work?

I. There is a comparison and a contrast between Psalm 23 verse 3 and verse 4.

Early in the year the shepherd leads his flock in the lowlands. But when the snows melt, he leads them to higher ground.

To get there, he often has to take them through a threatening ravine with dangers on every side.

There is also a contrast between Psalm 23 verses 3 and 4.

In the first three verses, David talks about the shepherd, but in this verse he talks to the shepherd.

He turns a psalm of praise into a prayer.

Perhaps some threatening situation came to his mind, and with a chill in his heart, he turns to speak directly to God.

II. What a shepherd does for the sheep and God does for David, He also does for us.

We’d like to think that if we follow Jesus Christ, all of our meadows will be green and all our days will be sunshine.

But God’s purposes for us sometimes mean that we must go through the valley of deep darkness to get to higher ground.

Don’t miss this descriptive analogy of the 23rd Psalm

Looking at the enemies that surround us, and the provision of an all-powerful God

I. Some commentators believe that there is a change of metaphor in Psalm 23:5.

Rather than dealing with the shepherd and the sheep, these commentators feel that now David is talking about the guest at a feast of a Syrian host.

But there is reason to believe that David has not left his original metaphor of sheep and shepherds.

II. He feeds his sheep in the presence of enemies.

Charles Slemming says that there is a viper that inhabits pastures where sheep feed.

It can bite the head of the sheep and cause an inflammation that may lead to death.

The shepherd anoints the head of the sheep with oil. The oil acts as a repellant and the sheep are safe from the viper’s bite.

III. God sends His sheep into a world inhabited by enemies.

In the Great Commission, He sends us into the world to make disciples, with the promise of His power and His presence.

In John 17, He prays not that we would be taken out of the world, but would be delivered from the evil one that is in the market.

Recognizing the Shepherd’s generosity and expressing gratitude, even when we don’t feel like it!

God’s provision for us is abundant: “My cup runs over.”

Good shepherds draw water for their sheep that allows them to drink with ease.

If we drink from an overflowing cup, others should get the benefit of the overflow.

I. The psalm closes with the promise that goodness and mercy will follow us all the days of our lives.

The word for follow is a military word. It means “they pursue us.”

David says SURELY this will happen, because what God has been to him in the past he knows that God will to be him in the future.

So the Shepherd goes before him and goodness and grace bring up the rear.

David can look to the future out of the assurance of what God has done for him in the past.

He will seek the house of the Lord, which means that he will seek out God’s presence in the temple.

This has come to mean what the rest of the Bible affirms: the Shepherd will take us safely home to the other side.

Me and My Neighbor | Week 1

Waiting in Silent Rest for God